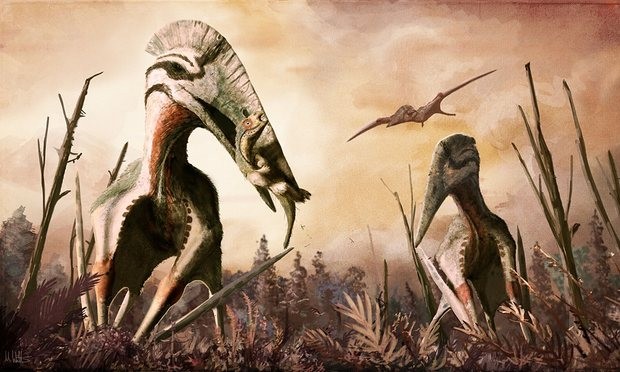 The Pterosaurs were thought to be the size of overgrown cranes that caught rat sized pray and swallowed them hole. However new fossils indicate some Pterosaurs grew much bigger than this.

A reconstruction of Hatzegopteryx in Cretaceous Romania. Illustration: Mark Witton

These giants lived 70 million years ago on the island of Hateg that is now Transylvania in Romania. This region has produced a number of interesting discoveries over the years due to its unusual fossil findings. Being cut off from the mainland many dinosaur species went through a process of dwarfism (causing large animals to become smaller). However it would seem that the flip side of this process is also true. Leading to small species experiencing gigantism.

This seems to be the case with the Pterosaurs. Belonging to a family called Azhdarchids this new discovery called Hatzegopteryx, would eat bigger pray the size of a small horse and had a wingspan of 10 – 12 meters. With no other giant predators on the island these Hatzegopteryx were the top of their ecosystem.

There are a few things that make the Hatzegopteryx so unique:

First their wings were much more like that of a bat rather than a bird. Having membranes stretched between their elongated finger and legs.

Secondly their fossils show that their build was much stronger. They were robust, stocky and powerful. This made it extremely dangerous.

Third their jaws and throat were much wider. With the ability to swallow a small dinosaur or even human adult or child whole.

For more information check out the full article here: https://www.theguardian.com/science/2017/feb/08/giant-winged-transylvanian-predators-could-have-eaten-dinosaurs-azhdarchids

The heaviest dinosaur was Argentinosaurus at 77 tonnes. It was the equivalent to 17 African Elephants.…
View more Dino Facts